a roleplaying game about being lost in space, far from home, with nobody left to keep you company. well, nobody except the computer and the ghosts of your fallen crewmates. to play, wraithlike in moonshadow requires itself, at least three players, two ten-sided dice, some paper, and a writing utensil. good luck

This is a transcript of a twitter thread I wrote about this game:

WRAITHLIKE IN MOONSHADOW is a game for three people about being trapped in a haunted spaceship with a malfunctioning AI.

This is such a fun concept! Each of the Characters has two different Stats, so we have three assymetrical games that interface with each other. I think it'd be best if all players hadn't read the other player's sheets, though.

Conflict resolution is a roll over dice system, with stress gradually increasing stats so that everyone is more likely to fail towards the end. Failure is likely to snowball, which leads to a grim slapstick comedy saved only by an unseen presence.

Finally, the randomised character and ship generators are really evocative, particularly the ship names and the personal items. They give you enough in a sentence to hang your character off of. Very nicely done.

This is a great one-shot game, and a really enjoyable night. Five stars!!!!

Thank you so much!!! I really appreciate your feedback 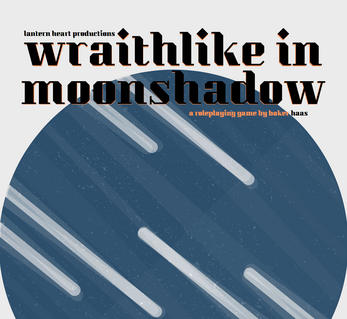